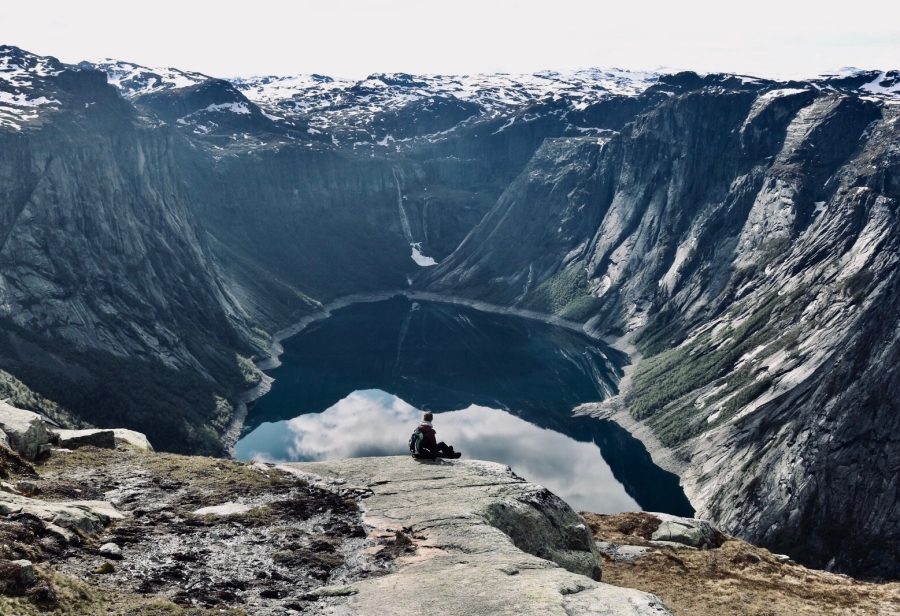 Halfway through our time in Norway.. it’s been amazing! We’ve spent the first half of our trip working our way through some daunting hikes. We kicked it off pretty strong by driving off our ferry at 2 pm and stepping onto our 4 hour hike at 6 pm. This is usually uncalled for but the hours of daylight in Norway are a bit longer than in the US. In May, the sun rises around 4 am and sets around 11 pm (although it felt like it never really set). This gives us plenty of time for the outdoors. It’s hard to get used to it though! It’s a good thing our camper van has some window shades!

First of all, Norwegian weather this time of year is no joke. It has rained on us at some point everyday and can change within a minute. Driving up to Kjerag (the first hike on the docket) it was cloudy but clear skies. 30 minutes in we were caught in fog so thick we couldn’t see 30 feet ahead of us. Not to mention we were nearly the only ones out there, adding to the eeriness! It wasn’t the easiest hike ever but we were up for the challenge. We would have been slipping off the rocks on our climb had it not been for a nice cable to hang on to most of the way up and down!

Making it to the top we had a short trek through the snow and we’d reached Kjeragbolten. It’s a boulder that fell into a rock crevice, wedging itself perfectly between two other rocks suspended freely roughly 3,000 feet above the fjord. Whoever was the first to decide to jump out on this was a little insane! It’s definitely not for the faint of heart. The snow up top only made things more scary, not being able to see where the edge truly began. Being sure footed was crucial for this hike and the next couple to come.

Driving through Norway is like being in a dream. The views are surreal and like the weather, the scenery can morph into something completely different in no time! It was disorienting driving in a lush fjord area one minute and a baron rocky snow covered area the next. We feel like we’ve experienced every season since we’ve entered this country. Sun, fog, snow, hail, rain..we’ve seen it all.

After a decent night’s sleep, ready for hike number two: Preikestolen. It’s a steep 2,000 foot cliff forming 90 degrees. As we mentioned in our previous blog we had to stick to a tight schedule this trip so when we woke to clouds and fog we knew what was in store for the hike but were hopeful it may change on the way up since we couldn’t just wait it out and go the next day. It didn’t change.. but we still got some exercise in and a bit of fresh air! It’s notorious for being a bit scary looking down but thanks to the fog we had no idea of how high we were so fear wasn’t an issue for us!

We were beginning to wonder if all of our hiking adventures we’d planned would only allow us views of fog versus fjords. Our time to shine came when we hiked Trolltunga. It’s a cliff that juts out 2,300 feet above the ground, surrounded by fjords and mountains. Out of the three it’s the one we wanted clear skies for most. It’s a hefty 17.5 mile trek so if we were soaked the entire way we would’ve been pretty miserable. It was a gorgeous day and the trail led us to some spectacular views of the fjords below, waterfalls, mountain lakes, and just beautiful scenery in general. Stepping out onto the cliff wasn’t as nerve wracking as it looks from afar but enough to get the blood moving! Needless to say, we enjoyed some much needed rest and relaxation after all this hiking.

We’ve set up camp for the night and as much as we want to relax outside, play some cards, and enjoy the nature.. it’s freezing. So you’ll find us hiding out in the van with loads of blankets and a thermos of something warm. It just wouldn’t be a trip to Norway without a little chills and rain though right? The views from the van aren’t so shabby anyway! Fingers crossed for better weather ahead..